Shaaray Tefila Through The Years

In September 1654, 23 Sephardic Jews came as refugees from Brazil to New Amsterdam. From 1654 until 1825, Shearith Israel was the only Jewish congregation in what would eventually become New York City. Towards the end of the 18th century, Jews emigrating from England, Germany and Poland in enough numbers for them to collectively talk about the Ashkenazic style of Shabbat services, and to miss their style of worship and songs.

A New Synagogue, More People, and A Fight for Control

In 1825, a group of Ashkenazim asked the board of directors of Shearith Israel for permission to hold an Ashkenazic ritual service in the basement of the synagogue. When denied permission, the group left the temple and founded B’nai Jeshurun 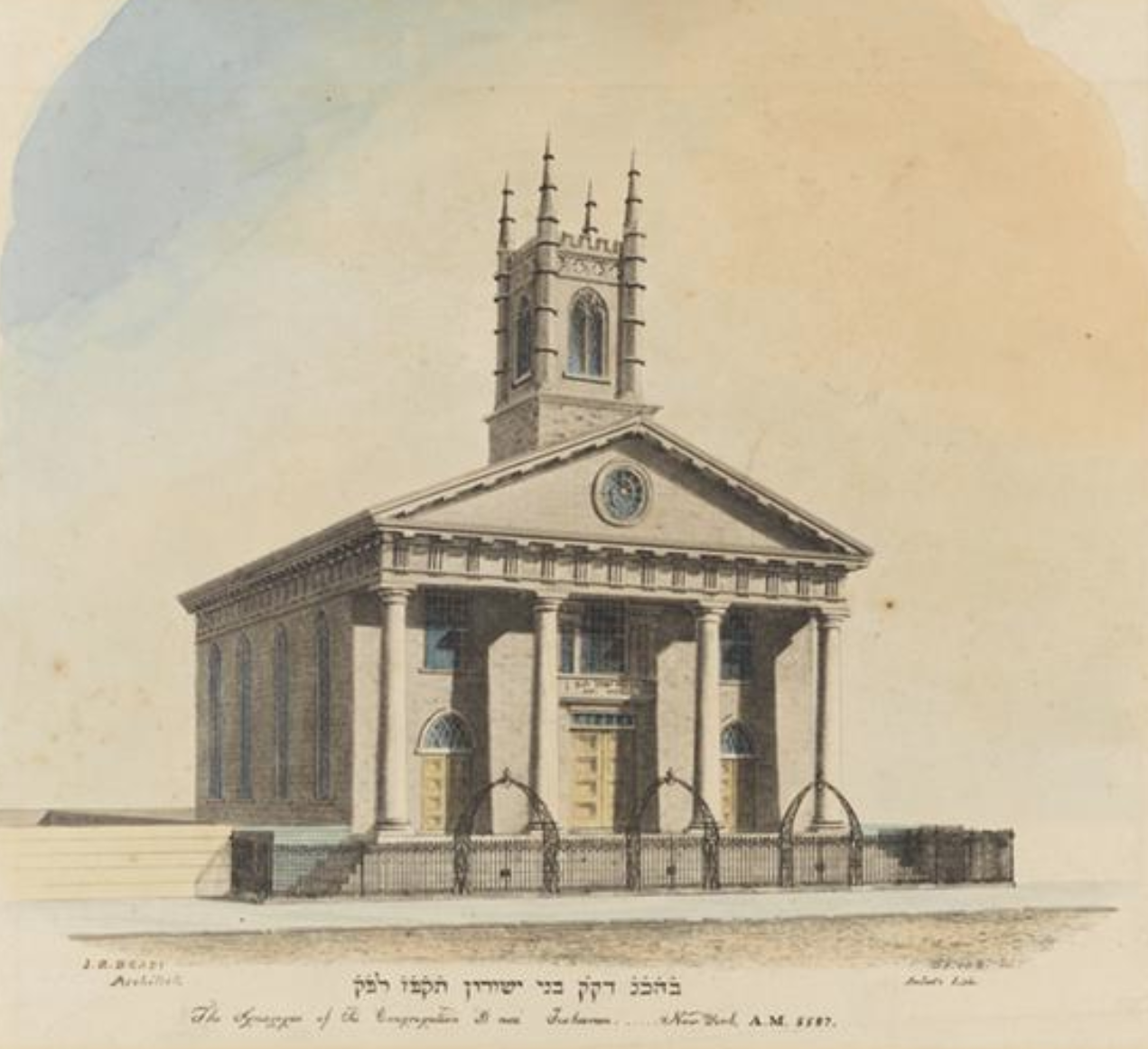 . Conflict over control of this new congregation, however, evolved into real and bitter differences. Even bringing the dispute to the New York Supreme Court failed to provide closure.

In 1845, one faction within B’nai Jeshurun locked the temple building. The other called on Rev. S. M. Isaacs to open the doors, and when he didn’t, the locked-out party broke into the temple. All parties agreed things had gotten out of hand, and there was a call for a decisive and permanent solution to end the acrimony. That solution was the creation of Temple Shaaray Tefila.

The Journey Through Manhattan Island Starts

Founded in 1845, Temple Shaaray Tefila’s first place of worship was on Franklin Street in lower Manhattan, near Broadway. 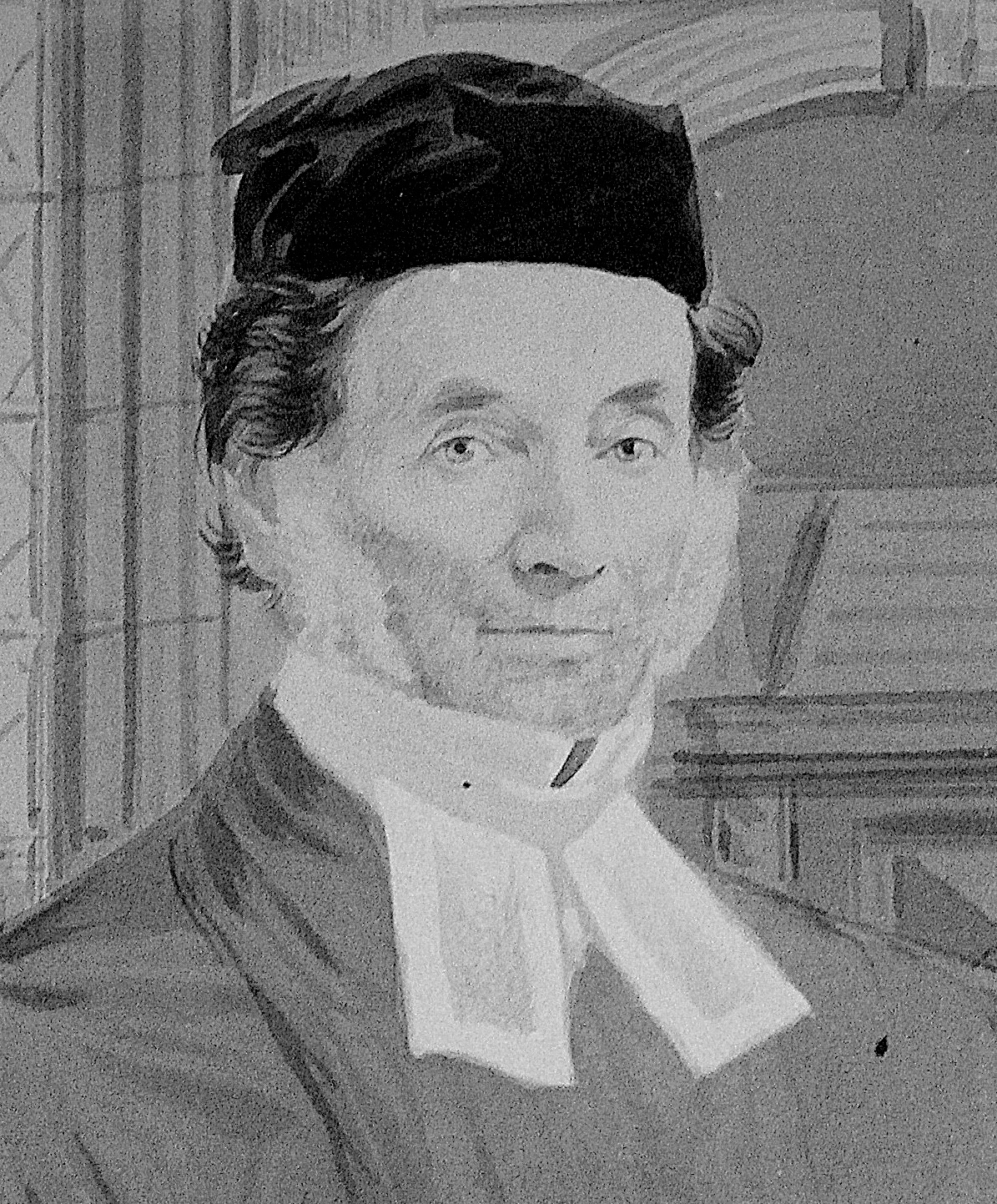 Rev. S. M. Isaacs, one of only two English-speaking rabbis in the United States, and a firm adherent of Orthodox Judaism, served as the first rabbi of the congregation (and continued to serve until 1877).

In 1846, Temple Shaaray Tefila built its first synagogue on Wooster Street in Manhattan, near Spring Street, at a cost of $50,000.

In 1862, with the neighborhood changing and the New York City Jewish population’s uptown migration, the congregation sold the building. Until 1869, the congregation worshipped in the old armory at the Herald Building.

In 1869, following the Civil War, Temple Shaaray Tefila built its second synagogue at 127 West 44th Street, at a cost of $200,000. It was built in what was called the Byzantine Mooresque style and its exterior was noted for a central entrance pavilion with a gilded dome above. The sanctuary was richly decorated and illuminated by a large rose window over the ark, which, following tradition, was located on the east wall, oriented toward Jerusalem. In keeping with Orthodox tradition, there was a separate gallery for women. 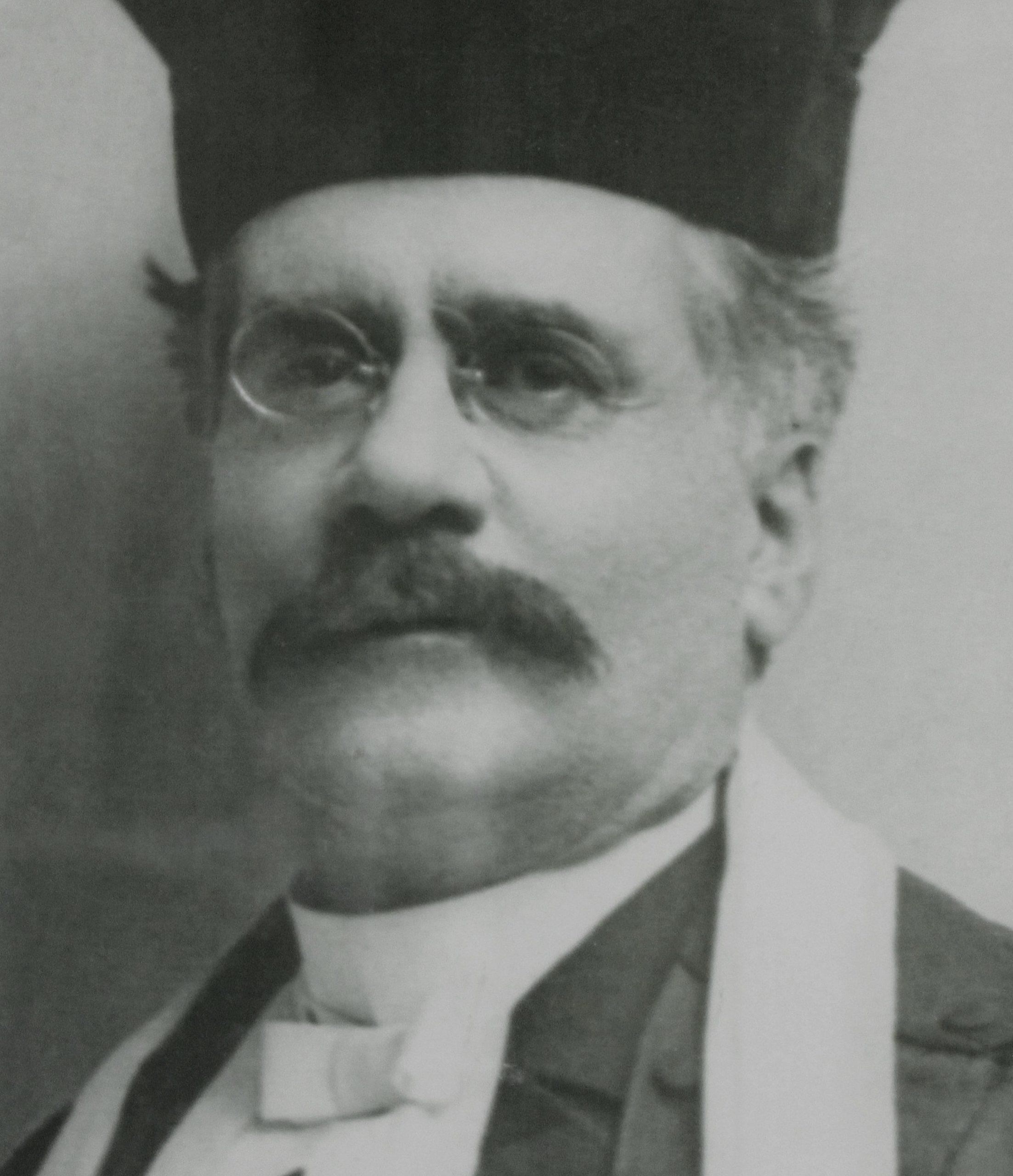 In 1879, Orthodox restrictions loosened. The congregation voted to shorten and simplify worship service and to include more English. Organ music was introduced, women were admitted into the choir, and men and women worshiped together.

In 1893, Temple Shaaray Tefila built its third synagogue at 160 West 82nd Street. The new building, which would come to be known as the West End Synagogue, was constructed with Indiana limestone, brick, and terra cotta. The new building reflected architect Arnold W. Brunner’s preference for the neo-Classical style. For decades, synagogue architects had turned to the Moorish Revival style, as the Gothic Revival style was too closely linked to Christian churches, and the Greek Revival style had no historic context with Judaism. Moorish or Byzantine motifs, on the other hand, reflected the pre-Inquisition period when Jews enjoyed relative freedom in Spain.

The community began to be known by its location, commonly referred to as West End Synagogue, rather than Shaaray Tefila.

In 1895, while still at 160 West 82nd Street, Shaaray Tefila became a Reform congregation.

In 1920, with the end of Rabbi Dr. Frederick de Sola Mendes’ tenure as spiritual leader,  Rabbi Dr. Nathan Stern began his tenure as spiritual leader (continuing to serve through his retirement in 1943). In 1921, Congregation Shaaray Tefila formally joined the American Reform movement and the Union of American Hebrew Congregations (or UAHC, now the URJ).

A Fire and a Final Move

In 1937, very early on the morning of March 27, two fires occurred simultaneously in the basement of the synagogue and caused minor damage. At 10:00am, 700 congregants assembled to celebrate the second seder of Passover. After the congregation departed, a third fire was reported at 3:15pm. This fire damaged the Ark of the Covenant and destroyed 18 hand-illuminated Torah kept in the Tabernacle. The $25,000 pipe organ was badly damaged and the entire south end of the synagogue was wrecked by flames, smoke and the axes of the firefighters. After investigations by the fire marshal, it was discovered that the fires had been set by the synagogue’s caretaker of 24 years who said he’d had an “uncontrollable impulse” to set the blaze. Harry N. Wessel, president of the congregation at the time, told The New York Times: “I am convinced his action is the result of a mental condition and that no vicious tendencies animated his act.” 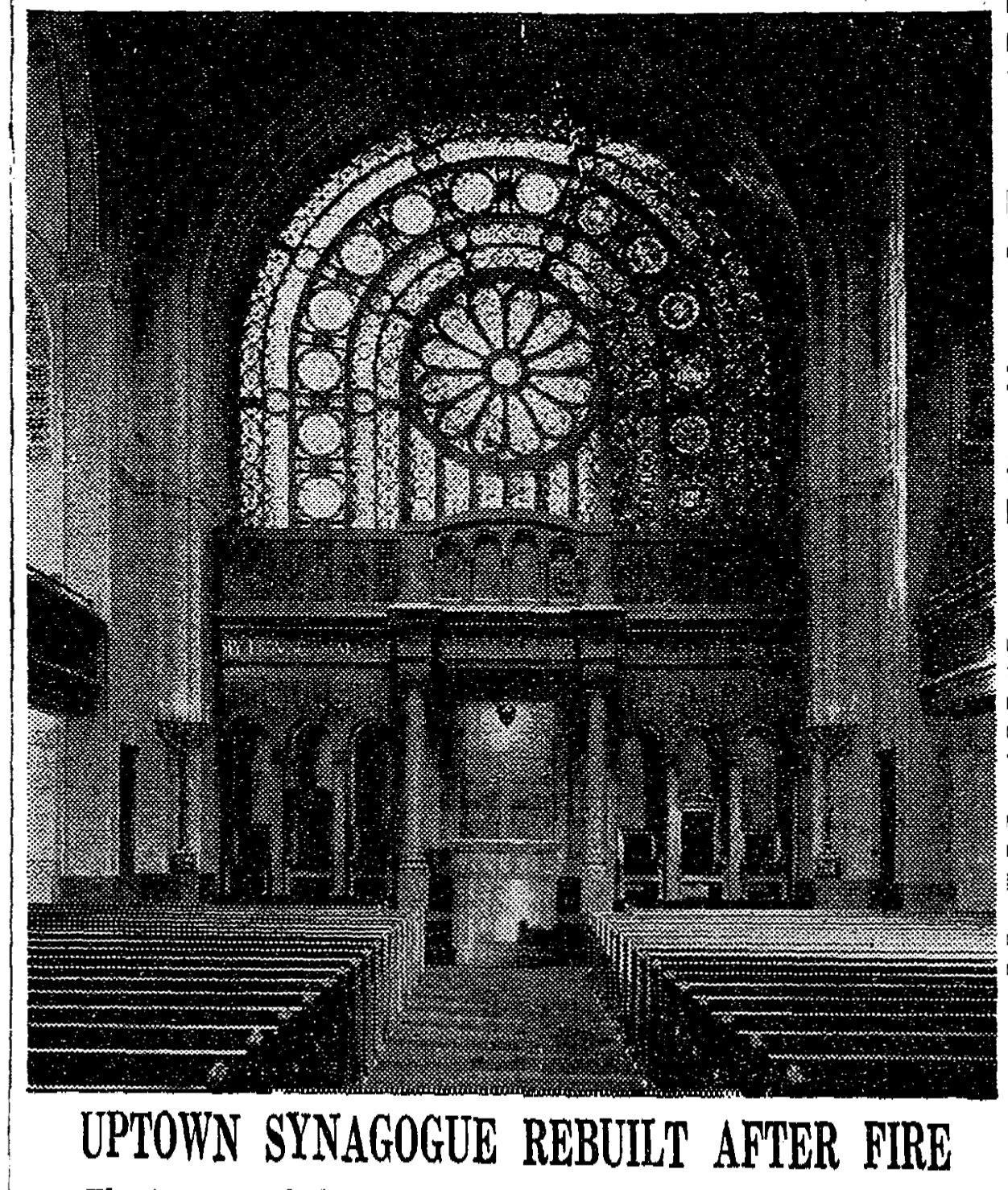 In late 1937, the synagogue was reconstructed and remodeled to designs of S. Brian Baylinson, and a four-story synagogue house was added. Rabbi Dr. Nathan Stern lead the rededication ceremonies on Friday night, December 17, and on Saturday, December 18, 1937, with leaders from neighboring Jewish communities in attendance to show their support.

Shaaray Tefila was very active in the war effort, opening its doors to armed services people stationed in New York, knitting comfort blankets for soldiers overseas and giving so much blood as to win an award from the Red Cross. 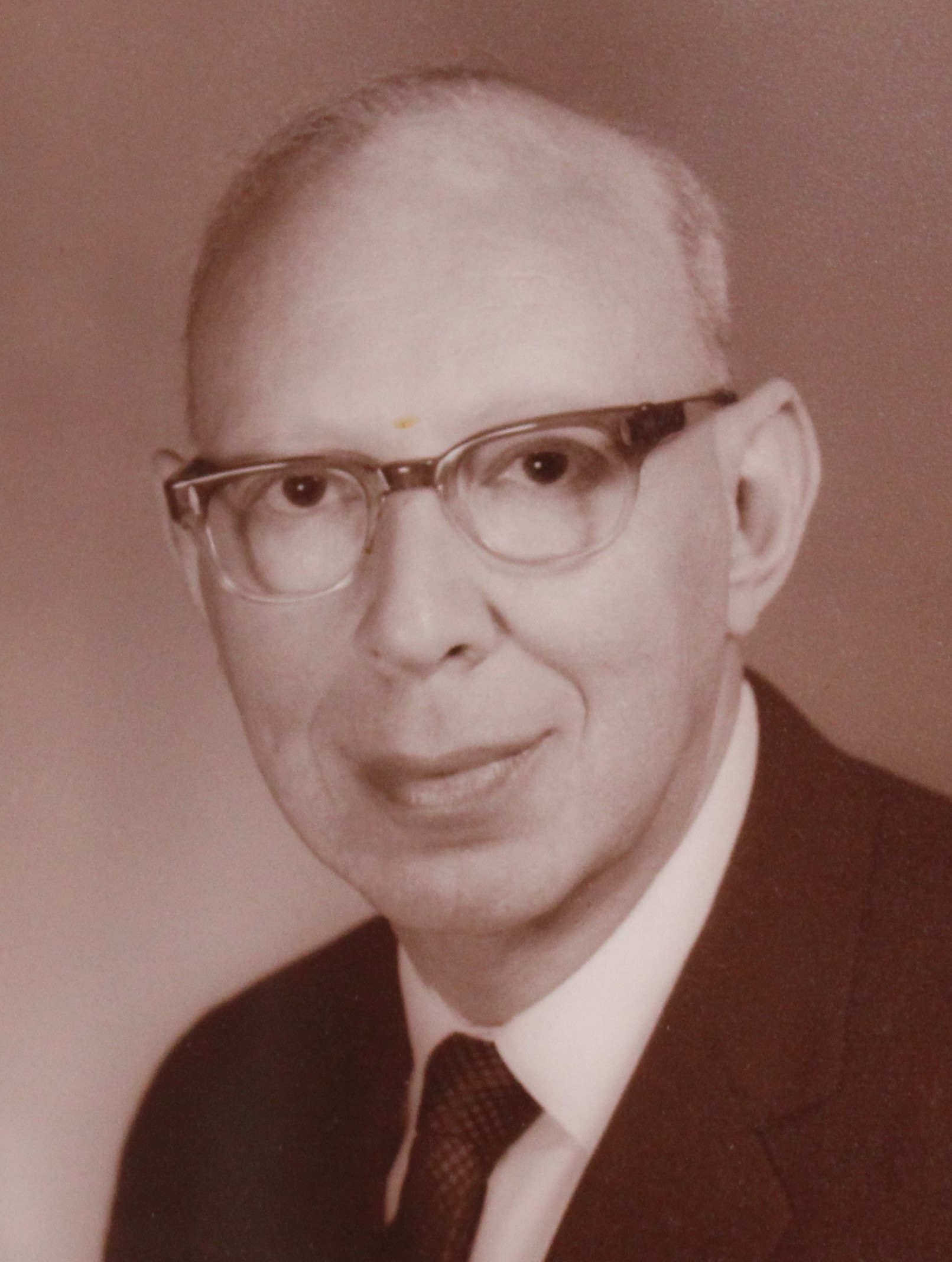 In 1944, following the retirement of Rabbi Dr. Nathan Stern, Rabbi Dr. Bernard J. Bamberger began his tenure as spiritual leader (and served through his retirement in 1971).

Following World War II, the demographic of the West Side changed as many longtime residents moved to other areas of the city. Much of the Jewish population shifted to Upper Manhattan and the East Side.

In 1958, after 65 years on West 82nd Street, the West End congregation decided to follow its members to the East Side of Manhattan. The congregation sold the synagogue buildings to the Ukrainian Autocephalic Orthodox Church of St. Volodymyr, who remain the tenants of the building to this day.

Since 1959, the congregation’s present sanctuary has been on the corner of East 79th Street and Second Avenue. (During the nine months of construction, congregants worshiped at All Souls Unitarian Church at 80th Street & Lexington Avenue.) The current sanctuary building was originally the Colony movie theatre, later to become a Trans-Lux theatre. The shell of the theatre was converted for use as a synagogue, as designed by John J. McNamara and Horace Ginsbern & Associates, and was dedicated on September 25, 1959. Governor Nelson Rockefeller, Mayor Robert F. Wagner, Jr, and city councilman Stanley M. Isaacs attended the first service. Rabbi Dr. Maurice N. Eisendrath, President of the UAHC (now the URJ) presided over the dedication.

Since moving to the East Side, the congregation reverted to its original and legal name of Shaaray Tefila.

In 1972, with the retirement of Rabbi Dr. Bernard J. Bamberger, Harvey Tattelbaum began his tenure as Senior Rabbi (until his departure in 2001).

In 1996, the corner of East 79th Street and 2nd Avenue became Temple Shaaray Tefila Place in celebration of the congregation’s 150th anniversary.

In 2016, Joel Mosbacher began his tenure as Senior Rabbi and continues to serve the congregation today along with Rabbi Sarah Reines and Senior Cantor Todd Kipnis.

Today, we serve 800 members in the Upper East Side of Manhattan. We are a gathering place for adults to explore Judaism and make friends through our lively and frequent events. We are the friendly neighborhood synagogue where kids—one of whom grew up to become a president of our congregation—gather after school to learn about their heritage and to gain leadership and social skills. We aim to be force for good in the community with our hunger alleviation programs and social justice work.

As we move into the 21st century, we strive be what we were on our first day—a place for seekers to find
meaning, connection and purpose.